China, with a population of 1.4 billion, is a booming consumer market where shoppers are hungry for American clothing brands.

Most recently, the website formed a strategic partnership with the US Department of Commerce, through the Office of Textiles and Apparel, to raise awareness of US brands and boost US apparel exports to China. .

“At this time, the Department of Commerce does not have anything in place to support e-commerce platforms to deliver American brands to China,” said Barbara Graff, managing director of Moonbasa USA, headquartered in China. Los Angeles. “That means OTEXA has us on their website, and they’ll use us when they do all their ‘Made in USA’ support. They will recommend Moonbasa to brands looking to enter China.

Kim-Bang Nguyen, director of export promotion and strategic alliances for OTEXA, said in a statement that the partnership with Moonbasa “will provide more inclusive technology tools for American companies to advance sales in China and increase their exports to this vast consumer market”. wanting to buy clothes and products made in the United States.

Currently, there are about 20 American clothing brands on the website, and most of them are from Los Angeles. The first to join Moonbasa USA last year was Taylor & Sage to develop its young contemporary sportswear brand.

One of the latest to sign with Moonbasa USA is cosette, a high-end womenswear line from Los Angeles launched last year by Rosa Kim. Kim said she joined because she wanted to test Chinese waters. “We decided to give it a try because China is a growing economy,” said the owner and designer. “It’s just an experiment, so we’ll see in a few months.”

In the two months since her arrival, she has sold a woolen coat for $432 on the website.

Moonbasa USA has a base fee of $2,500, which covers the cost of trademark registration in China and designing an online store. The website also takes a percentage of net sales. Other costs are involved if garment companies decide to store their goods in Moonbasa’s warehouses, located in Guangzhou, Shanghai and Beijing, which happens more often when their garments are made in China. Alternatively, companies can deliver their goods directly. 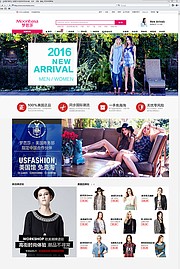 When Moonbasa was launched in 2007, it only sold Chinese-made clothing and lingerie on its website. There are now 200 Chinese brands on the site. But in 2014, the company was bought by Guangzhou Mola Internet Technology Co.led by Managing Director Don Ho, who wanted to expand the website with an American-branded online mall primarily targeting consumers between the ages of 18 and 35, who are the primary shoppers attracted to American brands.

Moonbasa has 10 physical stores in China that sell merchandise, but last July it opened a new digital store on Nanjing Road, Shanghai’s popular shopping street, where consumers can visit a computer to order clothes and try on goods. . “There are real goods like a regular retail store and there are digital screens,” Graff explained.

From computers, you can order an item, like a dress or a blouse, and have it delivered to your doorstep within 48 hours.

When Moonbasa USA was launched last year, the company exhibited at WWDMAGIC show last August in Las Vegas. It will be at Las Vegas Convention Center again for the February 16-18 series.